In a Hurry? Some Quick Facts about Bora Bora

In this article we’ll discuss some fun informational and historical facts about Bora Bora. But, first, the island is located northwest of Tahiti in French Polynesia, the small yet breathtaking island of Bora Bora is a tourists’ paradise. There is no wonder why the island is considered one of the most beautiful places in the world, especially famous among couples and celebrities.

Surrounded by stunning coral reefs, featuring pristine waters, blue skies, and a peaceful environment, Bora Bora has a lot to offer tourists of all ages. In addition to the surreal landscape, Bora Bora Island has an extinct volcano with two highest peaks known as Mount Otemanu and Mount Pahia. The island of Bora Bora has many more interesting facts that attract tourists, scientists, and nature enthusiasts from all over the world.

Every year, the island welcomes thousands of visitors who come here to enjoy the breathtaking views and tranquility is a much sought after destination for couples. Words alone do not do justice to the beauty of Bora Bora Island. Other than attractions, there are many fun facts associated with the island. Read about these Bora Bora facts and load up on your tidbits of interesting island information prior to your arrival in Bora Bora.

What does Bora Bora Mean?

The literal meaning of Bora Bora is ‘First Born‘ or ‘created by the gods’.

The island was originally called Pora Pora in it’s abbreviated form. As you will read below the letters ‘P’ and ‘B’ sound the same in the local Tahitian language dialect of the island. When the Dutch explorer, Jacob Roggeveen, discovered the island he and his crew quickly took the name as Bora Bora and, it has stood as the commonly known name ever since.

The Island of Bora Bora was born out of a volcano

The most interesting fact about the Bora Bora island is that it was born as a result of a volcanic eruption. Around four million years ago, there was an eruption that was observed by the people of a distant Tongan Island who then discovered the island.

It initially received the name of “Vava’u” and remained uninhabited for a long time. Though the island welcomes many tourists every year, it is still considered as one of the most secluded places on earth.

Bora Bora was a supply base during World War II

Not many people are aware of this historical fact about Bora Bora. In the 1940s, the island served as a supply base of World War II. The island served as a outpost for over 6000 US soldiers. The inlet, Motu Mute, was the central hub for supplies. There were eight cannons situated on different parts of the islands to protect it during the war. Today, only one remains at the island as a reminder of the battle. 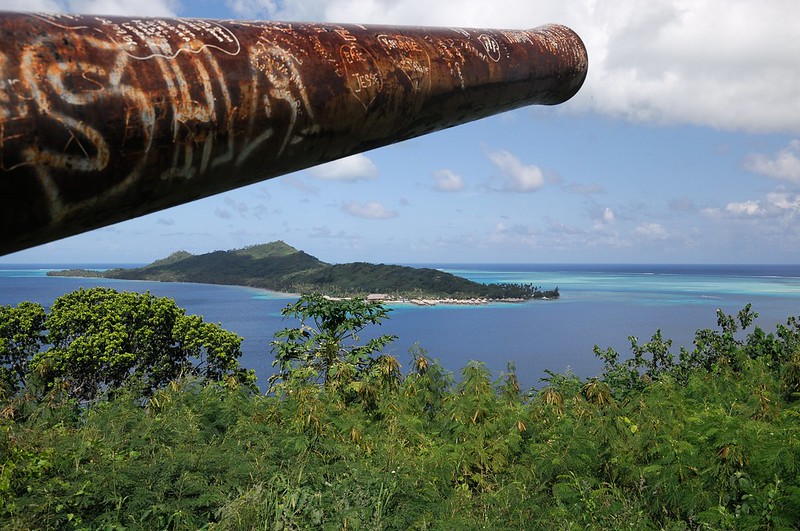 There is no ‘B’ in the Tahitian language

Tahitian is an interesting language spoken by the people of Bora Bora along with French. The language has only 16 letters and only around 1000 words that do not include the word “B”.

The island was initially known as ‘Pora Pora’ which means ‘firstborn’. The name refers to the son of the King Hiro of Raiatea, who first ruled Bora Bora. After the English started residing here, they named it Bora Bora that is known with this name to date.

The Best Coral Reefs Are Found In Bora Bora

There is a natural aquarium known as “Lagoonarium” located east of the main island. The Lagoonarium features many sea animals such as manta rays, stingrays, and many other types of unique rays that you’ll not see elsewhere.

Scuba Dive with Sharks, Only In Bora Bora 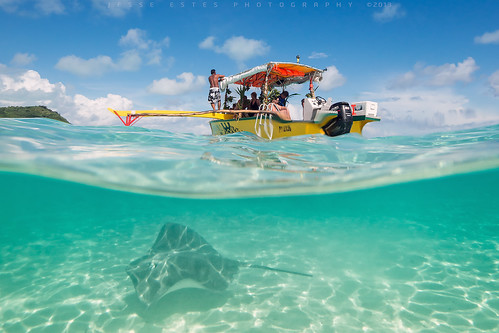 Given the popularity of the Bora Bora island, many people might think that a large number of people call it home. But, it is not entirely true. The island has a permanent population of around 10,605 people living in the flat coastal strip that encircles the main island. Tourism is the primary source of income for the people of Bora Bora, who are relatively poor.

Island Paradise of the Young

Another cool fact about Bora Bora is that half of the island’s population of 10,000 consists of people under the age of 20. What’s more exciting about these young folk is, they fill the beaches of Bora Bora during the day and organize exciting parties at night. If you are a party lover, you’re surely going to have a blast on Bora Bora island.

The Symbolism of Flowers

When you visit Bora Bora island or any area of french Polynesia you’ll most liked be greeted with a Lei, or flower necklace, made from the Tahitian Gardenia( Tiare).

You’ll notice the local women with flowers on their left ear. In Bora Bora, a flower on the left ear indicates that the woman is taken. However, a flower on the right ear signals that men can approach the woman as she is single. Don’t be shocked when you’re approached by women offering to place flowers in your hair as it’s quite common in Bora Bora.

Tattoo – A Sacred Form of Art In Bora Bora

The people of Bora Bora believe that “tattoo” has derived its name from the sons of Ta’aroa – the God of Creation. The locals consider tattoos as sacred art and also a sign of beauty. In the past, people of Bora Bora used to get a tattoo to reflect their higher position in society.

Rarely you’ll find a tropical island that is free of snakes or pests. If these things normally limit you in your booking choices when searching for your next Island beach vacation, look no further than Bora Bora. The island has no harmful snakes or any other creepy crawlies that would give you the heebie jeebies and you half to death! You don’t even need to bring a repellent with you when visiting Bora Bora, as nothing will bother you no matter which part of the island you are on.

The only thing that you need to beware of in Bora Bora is “falling coconuts”. The island is full of tall coconut trees. While you’re passing under one, look around and above carefully as coconut may fall on you anytime. Considering the heavy weight of coconut, an incident could be quite disastrous so be sure to hone your reflexes to avoid Bora Bora’s coconut rain.

Bora Bora has many funny and interesting facts attached to it that you must know if you are planning to plan a vacation there. One of the most important facts is, there is no public transportation in Bora Bora.

Given the small size of the island, there is only one main road along the shoreline. You won’t find any mode of public transportation here except for a bus known as “Le Truck”. This bus conducts two-hour tours around Bora Bora island. Though you can roam around by bike, the most recommended way is to use a boat between islands.

The Pearls of Tahiti

Though you can find many souvenirs at Bora Bora, the most memorable item that you can buy here is the dark-colored pearls. These pearls are found in the archipelago of French Polynesia. The color of pearls at Bora Bora ranges from black to green to blue to gray, among many others. You can buy the pearl by itself or in the form of jewelry. However, don’t expect the pearls to be inexpensive. 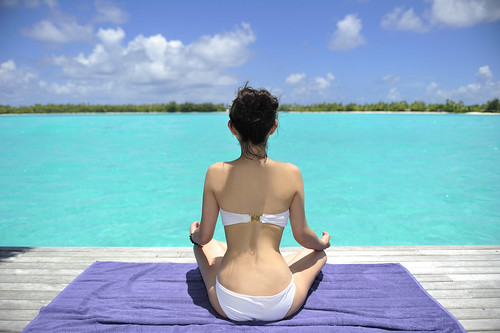 In 2019, Matira Beach in Bora Bora made it to the top 10 most beautiful beaches in the world. The pristine waters and white sand of the beach make it a perfect spot for visitors. An added bonus of Matira Beach? It is the only beach that can be accessed by the public in Bora bora. If you really want to enjoy this beach, you have to come here early to avoid huge crowds.

We cannot talk about the interesting facts about Bora Bora and not mention the diverse food dishes it has to offer. Though many local food items are worth trying here, the most famous and delicious dish is “Poisson Cru”. It is made of raw fish and vegetables marinated in a mixture of coconut milk and lime juice. The dish is then served hot in a coconut.

This article will provide you and your kids some useful and information Bora Bora facts. The information here may form the basis for a school project or you may be planning your next wonderful vacation to this Island Paradise.

There is certainly a lot more to Bora Bora than the above mentioned facts. Visit the island and discover yourself!

If you're looking for an unforgettable immersive experience, look no further than teamLab Borderless in Tokyo. This museum is known for its futuristic, often digitized interactive installations that...

Continue Reading
link to Cape Canaveral Florida: 10 Things You Should Know Before Visiting

If you're planning on visiting Cape Canaveral Florida, there are a few things you should know. This area is known for its beautiful beaches and Kennedy Space Center, but there is so much more to see...

Hey! My name is Sophie and I'm the proud owner of TravelSpock.com. I have a passion for travel and blogging and the digital nomad lifestyle is one that appeals to me.
Enjoy the articles on my site and reach out to me if you have any questions or comments about the locations I have written about. Happy travels! :)